The little round sign above the door told me I was at the right place:  Aldea Yanapay – Otra Forma de Vivir.  As I searched for the corresponding buzzer, a voice approached from behind.

“Are you here to volunteer?”  It was as much an eager welcome as a question.

“I just came by to see the after-school program,” I started to respond, but it suddenly no longer seemed necessary to give a calculated, uncommitted answer.  Her unfeigned enthusiasm was already convincing me that this would be worthwhile.

My breathing was still noticeably labored as I followed her through the doorway into an open courtyard.  I had only been in the thin Andean air of Cusco since the previous morning, and despite two months of living in Peru I had not abandoned my New York City sidewalk pace when I followed the rising streets from the center of town.

My first month had been spent as a volunteer based in Piura, an energetic city in the country’s northern coastal desert.  Each day an over-packed combi van brought me the twenty-five kilometers out to Altos de los Mores, then a moto-taxi jolted me through the impoverished community growing tenaciously from the dust and sand, to the school where I taught English to the fourth and the sixth graders.  The classroom hours were exciting, the kids were eager and responsive, and by witnessing the accustomed lives of Third World poverty I was beginning to develop the insight I had hoped for.  However each day questions resurfaced in my mind.  Was I really helping?  What could I offer to these children in my short stay that might improve their lives and their community?  Was this the best investment of my time and energy? 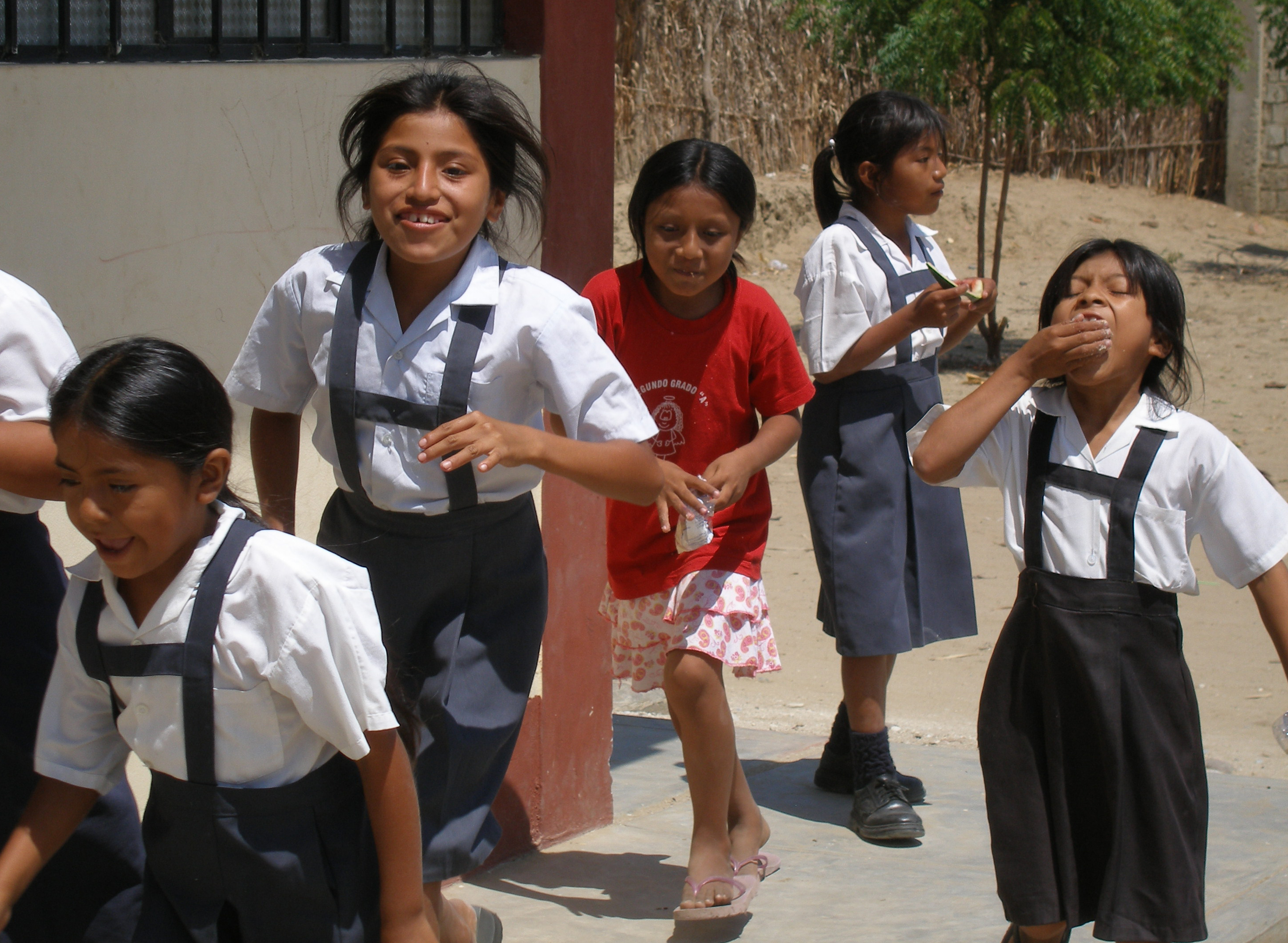 Just outside of Cusco’s center, weary façades begin to shed their paint to reveal the earthen material beneath, and once even rows of terra cotta roof tiles now meander down to sagging eaves.  It was in such a courtyard where Becky and I introduced ourselves over the squeaks of cuyes, guinea pigs, which were seemingly overrunning the house on the left.  A few kids in school uniforms followed us through the doorway, pushing their way past each other.  They paused to greet us – an exchange of kisses with the girls and quick but sincere handshakes from the boys – then raced across the uneven stone path and disappeared past the far corner into the school.  Reports I had read by former volunteers boasted about the warmth of the kids and volunteers at the Yanapay school, and I could already see that their superlatives were not an exaggeration.  Here I was already the familiar “profe,” – teach’ – and I hadn’t even entered the school!

Once inside the school’s own tiny courtyard, I was immediately put in charge of the hand and face washing process by the director:  Yuri Barrio de Mendoza, a young Peruvian dreamer who has the gift of turning lofty personal ideology into concrete reality.  What he began as a small alternative school in 2004 is now a flourishing after-school program that serves hundreds of disadvantaged kids in Cusco, as well as a successful café to help support the school, and two homes to house the volunteers who arrive from Australia, Spain, Denmark, Israel, or Venezuela. 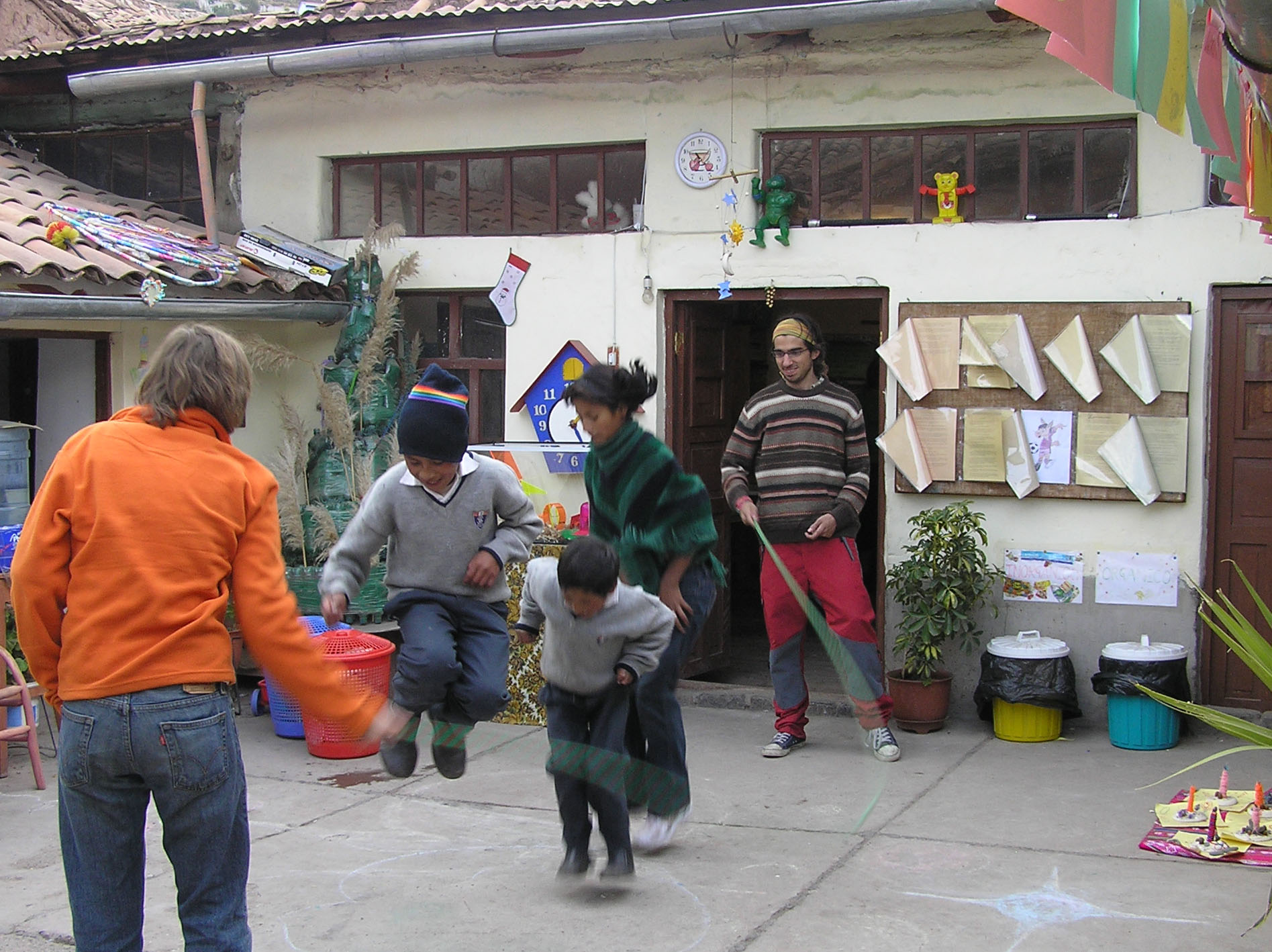 Throughout my first days at the school there was little explicit instruction of my responsibilities.  And, I observed, there was little declared outright to the kids regarding the values and goals of Aldea Yanapay.  Although there were talks and lessons led by Yuri and by the volunteers, the principles were communicated primarily through example, in a purposefully cultivated environment of compassion and personal responsibility.  I soon came to recognize that the egalitarian group created from international travelers, foreigners to this place and to each other, made for ideal volunteers to demonstrate these implicit values of respect, tolerance, non-machismo-ism, and peaceful communication.  Within this unique community, I cautiously sought out my position and searched for an effective role.

I was coaxed out from under my heavy blankets early each morning by an over-amplified singing nun and her equally emphatic guitar.  Since the volunteer houses were momentarily full, I had found a cozy room for the month in a hostel run by the Dominicans.  The hostel, sitting within their large complex on what was originally the site of the Inca sun temple, formed one side of a whitewashed courtyard containing the playground and morning assembly yard of a girls’ primary school.  The students’ immaculate new uniforms and coordinating recreation outfits provided a revealing contrast to the repeatedly hemmed jumpers and frayed sweater cuffs of many of Aldea Yanapay’s students.

Yuri told me about a volunteer who arrived at the Yanapay school one day to offer his services.  However, when he found the children clean and relatively well clothed, the visitor declared that they didn’t need his help.  With lingering disappointment in his eyes but determination in his voice, Yuri exclaimed to me, “That part is easy – I wash their faces, I find them these clothes.”  His written project history, posted on the courtyard wall, expanded on his thought:

“What can you do with well-fed children with nice clothes, if behind all of that they have marks on their skin from abuse, if in their heart there is a rock from lack of motivation, from lack of love?  The way I see it, what my country needs is not just relief from material hunger, but rather a compensation of the hunger that some people have forgotten about because it is free and invisible.  It’s called values, principles, love.” 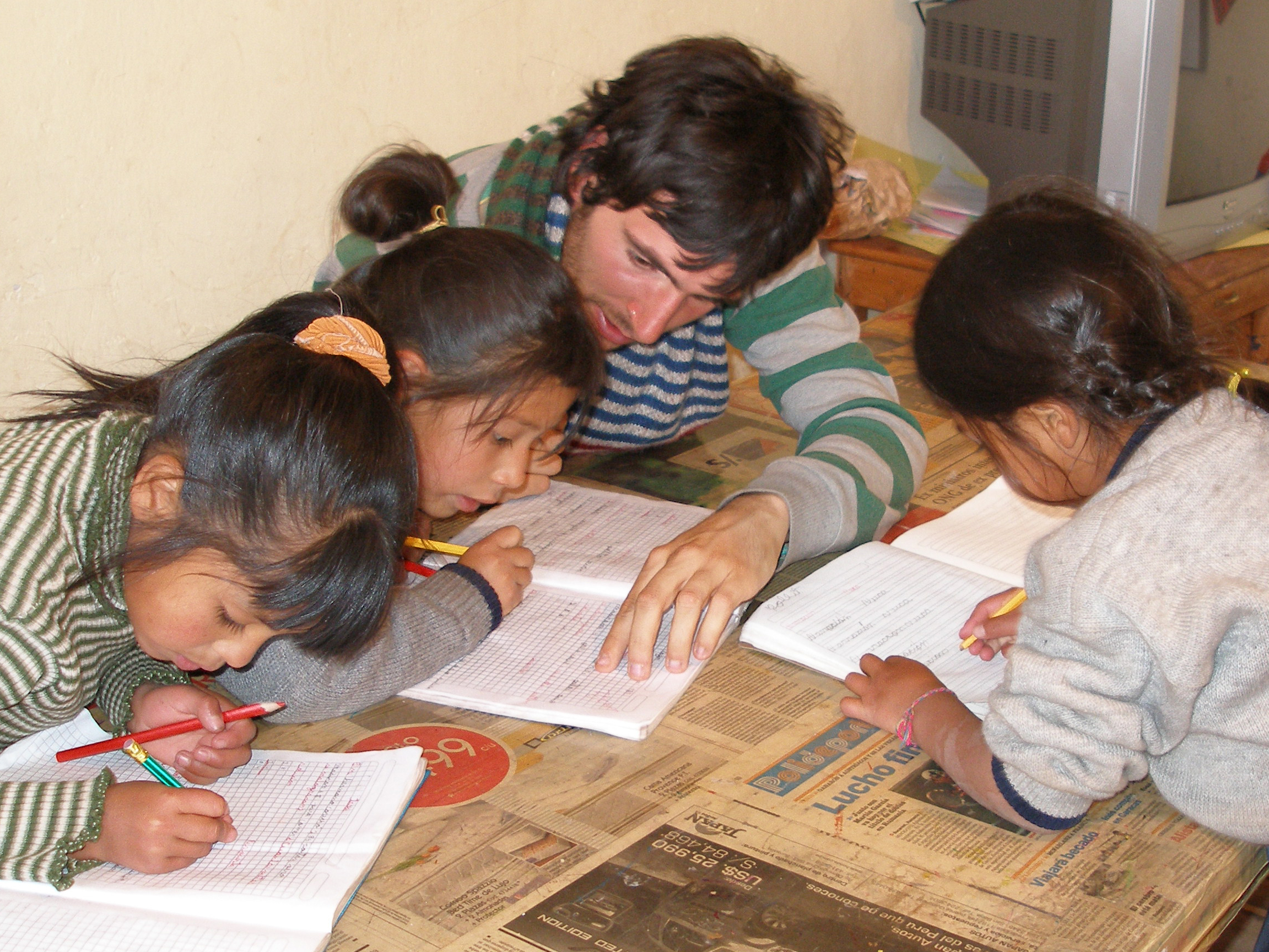 A volunteer assists Aldea Yanapay students with their homework

As the kids at Aldea Yanapay learned about Buddhism in the daily world culture lessons, I gradually learned to let go of my conscious role of “volunteer,” in order to become a better one.  The tools I needed to do this work were not the ones I had anticipated and prepared for in the months leading to my trip.  In fact, by that point there was little I could have done to prepare.  Knowledge of teaching theory and practice, or research into Third World social conditions were not nearly as important as compassion and generous, unbiased attention – traits which had to already be developed and established through countless influences and accumulated experiences.

In the various classrooms of the Yanapay school, I played Uno and assisted with the puzzles the kids obsessively assembled.  I listened to them read the mishaps of Sapo y Sepo – Frog and Toad – and corrected them from leaping past the commas and the periods.  I watched as they constructed a papier-mâché volcano and the ill-fated town at its base.  I found I couldn’t explain even basic mathematical concepts in Spanish, but I could still prod them toward the right answers. 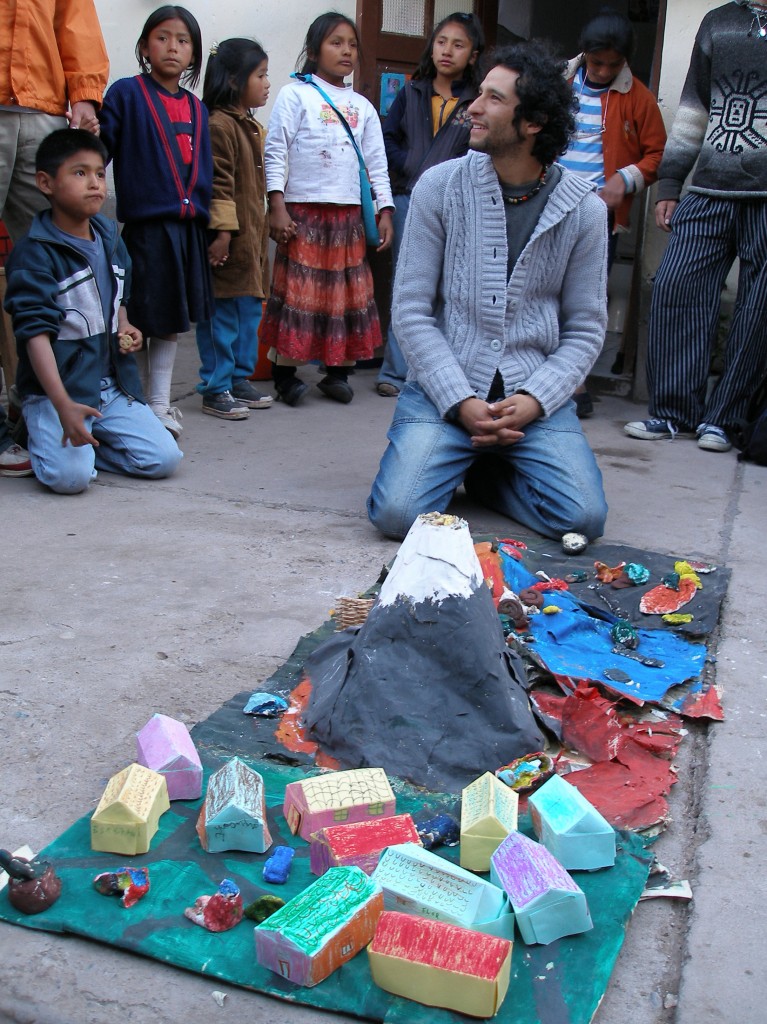 Aldea Yanapay director Yuri prepares to set off the volcano

One day in my final week at Aldea Yanapay, I arrived early and found three of the girls waiting across the street.  I joined them on the dusty cobblestone sidewalk and we broke open a coconut, which they shared as passing cars exhaled their exhaust into our faces.  Defending myself from a group tickle attack, I grabbed the littlest girl and flipped her upside down, inducing giggles from her and the others.  At some point the looming doubts about what I could offer had simply stopped, without me even noticing.  I understood that providing a lap to sit on through a movie, or a hand to hold one end of a jump rope might be a greater contribution than I could fully understand.

I was beginning to learn for myself un otra forma de vivir – another way of living.