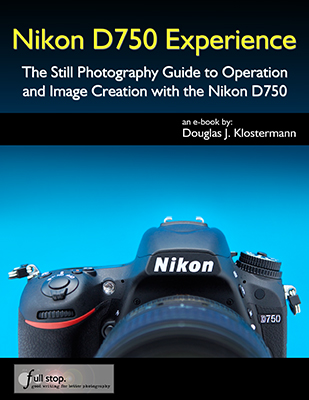 2014-12-18 – Correction (correction made in Amazon v1.0a) – The caption in Figure 228 has reversed which number is the user-set ISO and which is the Auto ISO setting determined by the camera. It should read:

Figure 228 – Manual Shooting Mode and Auto ISO – The user has set the exposure settings at 1/60 shutter speed, f/4 aperture, and 6400 ISO. However, there would be too much light for a proper exposure at these settings and the image would be overexposed, so the camera has used Auto ISO to decrease the ISO setting to 4000, and the Exposure Indicator Scale remains at 0.

Nikon has released D750 Firmware Update 1.10. It includes numerous bug fixes to various menus and functions, as well as adds the following feature:

“An External recording control option has been added to the HDMI item in the SETUP MENU. If the camera is connected via HDMI to a third-party recorder that supports the Atomos Open Protocol (the Atomos SHOGUN, NINJA2, or NINJA BLADE), selecting On allows camera controls to be used to start and stop recording. More information is available in a supplementary manual. Note: Choose an option other than 576p (progressive) or 480p (progressive) for HDMI > Output resolution in the SETUP MENU.”

Sign up to receive notices of major updates to the text of Nikon D750 Experience as well as to be eligible to receive free copies of the updated e-book file (for major updates):