Updates to the text of Nikon D600 Experience: 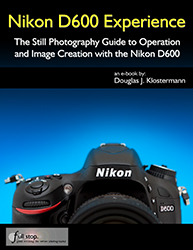 2012-11-12 – Version 1.0 – Published. Available in PDF and EPUB versions on Full Stop, on Barnes and Noble, Apple iBooks, and Kobo, and the Kindle version on Amazon.

In Section 3.3 Shooting Menu – Image Area item – I have been requested to add some further explanation of the differences between FX and DX format sensor size, especially regarding the effect on depth of field:

For those coming to the full frame FX format D600 from a “cropped frame” DX format camera (with a smaller APS-C sized sensor), the full frame D600 sensor (and thus viewfinder too) will capture a wider field of view. This will allow you to photograph wider, more sweeping views with your wide angle lenses at any given distance to the subject, but will not allow you to zoom in as “close” as you are used to when you used your telephoto lenses on a DX camera. You can see the difference of the field of view between FX and DX, for any given scene, when you set the Image Area for DX using this menu item, as shown in Figure 27). Figure 27 – FX vs. DX Image Area – the rectangle lines in the Viewfinder indicate the area that will be captured with DX Image Area. And thus it also shows the difference in the field of view, at the given distance, between the FX image area and the DX image area.

The use of the same lens on a DX format camera (or the D600 set for DX Image Area) and on an FX format camera (or the D600 set for FX Image Area) will also indirectly affect the depth of field at any given focal length. Working in FX format will allow you, indirectly, to capture more dramatic shallow depth of field. This is because depth of field is affected by not only your aperture setting but also the camera-to-subject distance.  So for example consider that you are using the full frame D600 to frame a shot with a 50mm focal length and f/2.0 aperture, from 10 feet away. To “recreate” this same shot with the APS-C sensor-sized D7100 and a 50mm focal length, you would have to back up several feet to have the exact same field of view. The full frame sensor will capture a wider field of view, while the APS-C “crops” the scene due to its smaller size. Even though you use the same f/2.0 aperture setting to take both photographs, the depth of field is not as dramatically shallow in the DX image because the camera-to-subject distance has increased (in order to capture the same scene). So, indirectly, a full frame camera can contribute to more dramatic shallow depth of field compared to the same framing of an image with a DX camera – because you will be physically closer to the subject with the FX camera.

You can use this Depth of Field Calculator to experiment and see the differences of depth of field with various focal lengths and camera-to-subject distances. You will have to estimate how far you would have to move back to recreate the same framing field of view with the DX format vs. the FX format.

In section 3.4 Custom Settings – small typo, corrected in blue below:

d9: LCD illumination
This is for setting the illuminating backlight …  Be aware that leaving it On much of the time will drain the battery quicker.

In section 8.1 Matrix Metering – small typo, corrected in blue below, in the last sentence of the section:

Or more likely, a combination of these three solutions.

In Chapter 12 Video – An Introduction – a small typo just after Figure 182, corrected in blue below:

The Movie Live View Display will show you many of your current settings, and allow you to change some of them with the appropriate button / dial use (see Figure 183).

In Section 4.1 Image Playback – small typo, corrected in blue below:

“As discussed in the Camera Controls section, you can view individual images full frame, press right or left…”

In Section 5.2 Autofocus Modes, in the Continuous-Servo AF (AF-C) subsection – small typo, corrected in blue below:

“As you can imagine, this is ideal for tracking a player running across a field, a dog running toward you, a toddler in action, or a bird moving across the frame.”

In Section 9.2 Histograms – small typo, corrected in blue below:

To view the histogram of an image: when you are reviewing your images on the rear LCD Monitor during image playback, press up or down on the Multi Selector…

Be sure to go to the Nikon website to check for updates to your camera’s firmware. Search for “D600 firmware” in the search box:

At the time of publication, Nikon has released a firmware update for the D600, which fixes some important issues including improved subject tracking in AF-C mode, white banding on image edges when using DX Image Area with ADL off, and some white balance issues.  Learn more about it and download the update on the Nikon website here:

Check back to the Nikon site occasionally to see if firmware updates have been released.

In Chapter 12 – Video – correction, shown in red and strike-thru:

1.3 Getting Started – Batteries: The first thing to do, if you haven’t done so already, is to fully charge the battery. The first couple times you use it I recommend that you fully drain it…

Focal Plane Mark – The symbol of the circle with the line through it, located on the top of your camera (to the right of the Control Panel), indicates the focal plane (location of the sensor)…

All of the above corrections and additions have been made to the EPUB (and B&N and Kobo) versions of the text.

These corrections for the PDF, MOBI (Amazon), and Apple versions will be coming soon.

In addition, the “text appearing over images” bug, which occurred with the EPUB version in certain e-readers and reading apps, is hopefully successfully now fixed.

In the Fluorescent sub-menu you can choose from seven different types of fluorescent bulbs, ranging in color temperature from 2,700 K to 7,200 K (see Figure 160).

In Section 3.3 Shooting Menu – ISO Sensitivity menu item – following text that was previously added has been revised for clarity. This info will also be summarized in the ISO Settings section of Section 7.2:

All of the above corrections and additions have been made to the PDF version, EPUB versions (including B&N and Kobo), and MOBI version (Amazon) of the text.

These corrections for the Apple iBooks version will be coming soon.

Nikon is offering an inspection, cleaning, and shutter replacement for D600 cameras affected by the sensor dust and oil issue. This service is being offered by Nikon USA, Europe, Japan, China, and Canada. Read the entire notice, and learn more on the Nikon USA or Nikon Europe sites here:

Setting for On (image review excluded) allows you to use the Command Dials for menu navigation and image playback in the same manner as On, but they will have no effect during image review. (Image playback is when you press the Playback Button to view images, and image review is when the images are automatically displayed immediately after capture.)