You can have a look at the Canon brochure from CES 2012, the 2012 Consumer Electronics Show in Las Vegas. The brochure highlights their new cameras, including the Powershot G1 X, where you can learn about some of its exciting new features such as Intelligent Image Stabilization, which will determine if the camera is taking a hand-held still shot, a macro shot, panning, a movie, on a tripod, etc. Also, the Face ID feature can be used to identify specific faces, which are then given priority when taking the shot.

Have a look at the Canon 2012 CES brochure here (cut and paste the link below to view it):

The latest in the Canon Powershot G series, the Powershot G1 X was recently announced, and should be available in February 2012. I wrote a bit about what new features it offers compared to the G12, namely a much larger CMOS sensor and a different lens to go with it. The G1 X is not a replacement to the G12, but rather is a new, even higher-end compact with manual controls, designed for dSLR users who want a very high quality point and shoot for various situations, as well as for dedicated enthusiasts who want the quality and manual control of a dSLR but don’t want the size, weight, and bulk of a dSLR body and lenses. The G1 X should prove to be a very popular camera for many demanding photographers for both everyday and travel use. 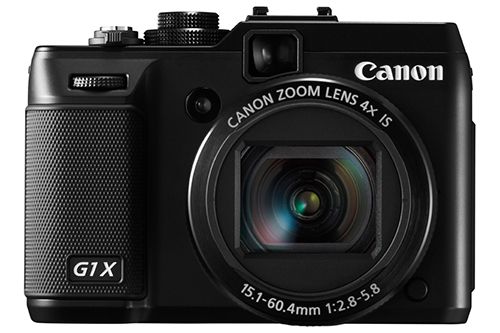 If you are trying to decide between the new G1 X and the older G12, the most important consideration (besides the price difference) is the sensor/ lens/ Digic V processor combo. While not quite as large as the ASP-C sensor of a dSLR like the T3i or 60D, the 18.7mm x 14mm, 14 megapixel sensor of the G1X is six times larger than that of the G12, and thus promises to offer not only higher image quality, but also much improved low light performance. Its f/2.8 maximum aperture at the wide end coupled with the larger sensor will also allow a larger degree of background blurring for portraits, etc. While you shouldn’t expect the degree of out of focus areas (bokeh) as a dSLR due to the minimum aperture becoming f/5.8 at the telephoto end, it will be somewhat improved over what the G12 or other compacts can offer. The 4X zoom lens of the G1 X also does not have quite the reach of the 5X zoom lens of the G12.

Other possibly important differences between the two are the camera size and weight and the battery life. While the G1 X is larger and heavier than the G12, it uses a smaller batter with a shorter shot life (see below for details). The G1 X also offers a high speed burst of continuous shooting, 4.5 fps for up to 6 shots at full quality, or 1.9fps for unlimited continuous shots.

The controls of both cameras are very similar, with some minor tweaks made to the G1 X. The G series is prized by demanding photographers because it offers quick and easy access to many manual controls, similar to a dSLR, as well as a viewfinder. Both cameras have a mode dial to quickly change shooting modes, an exposure compensation dial for quick EC adjustments, and button access to autofocus modes, metering modes, flash, as well as exposure lock. The G1 X looses the ISO dial of the G12, but places it on the rear control dial for relatively easy access. The G1 X however adds a movie record button for rapid start of movie recording in any shooting mode. As a result of these changes, the AE-L button is moved lower, and the self-timer and manual focus functions no longer have dedicated buttons, but can be accessed in the menus.

Below is a further comparison of some of the key specs of each camera:

So as you can see, the cameras are quite similar in many ways, with the exception of the sensor, lens, and processor, which is going to make a very large difference in terms of improved image quality, higher dynamic range, better low light performance, reduced noise at high ISO settings, longer flash reach, larger image size allowing for more aggressive cropping, and will allow the ability to achieve more dramatic depth of field. According to Canon:

The DIGIC 5 processor uses approximately four times as much information as before to resolve one pixel, with the aforementioned six times faster processing speed. For the total performance of noise and image clarity this has an effect of two stops at high ISOs compared to the PowerShot G12 compact at ISO 3200, and three stops at lower ISO.

The 14 bit RAW allows for those who shoot in RAW file format for later post-processing to capture images with more dynamic range, better noise reduction, and more shadow detail.

Most of the other features such as the viewfinder, scene modes, autofocusing systems, creative filters, movie modes, and white balance options are nearly identical on both models. The G1 X also adds improved, 4-stop image stabilization, a built in 3-stop neutral density (ND) filter, and an intelligent face detection system which will give focus and exposure priority to faces it recognizes. It also offers multi-area white balance correction so that different light sources are equally neutralized or balanced – such as the flash lit subject with the fluorescent lit background.

So, how do you decide between the two? Who is the G1 X for vs. the G12? Well, if the price difference doesn’t make up your mind for you, the G12 is for those who want a very high quality point, rugged point and shoot with manual controls and great image quality. If you are going to be viewing and sharing your photos online or on a computer screen primarily, the images from the G12 should suffice. You can still do post-processing and make small or medium size prints for the special images. It is great for everyday use and for travel.

But if you need to take it to the next level – if you need or want near dSLR quality images for more invasive post-processing, larger prints, cropping, or even publication, you will want the G1 X. If you want the ability to more easily create background blurring, and the occasional high speed burst for action shots, you will want the new model. If you want to get as close to a dSLR without the size, weight, and lenses, the G1 X (or Sony NEX-7) is the answer.