If you have begun to take control of your camera’s functions and settings and are understanding the basics of exposure, and perhaps are working in Aperture Priority or Shutter Priority Mode, you may still find that sometimes your images are coming out lighter or darker than you desire.  This could be due to an unusual lighting situation, a scene that contains a wide range of bright and dark areas, a subject that is back-lit, the camera metering from the “wrong” area of the scene, or a number of other reasons.

In this situation hopefully you have begun experimenting with exposure compensation.  If not, exposure compensation can be the solution to these types of problems by enabling you to “over-ride” the camera’s exposure decision and making the next image lighter or darker as desired.  And since most all the functions and settings of a dSLR are inter-related, the use of other metering modes such as Center-Weighted or Spot metering can also be part of the solution (or part of the problem) – but those are topics for other posts!  I’ve written one about Exploring Metering Modes, and should probably tackle some exposure issues soon. Figure 1 – French Medieval Storefront Carving, Gloucester, Mass. – Three bracketed exposures of the same scene:  the “proper” exposure as determined by the camera (Center-Weighted Average Metering Mode) in the center; over-exposed +1 stop on the left; under-exposed -1 stop on the right.  The desired exposure, for my eye, lies somewhere between the “proper” exposure and the darker under-exposure, where some highlights on the figure remain but the color and detail of the wood can be seen in those areas.  Center exposure:  Shutter speed 1/60 aperture f/2.8, ISO 200

If you have begun to make use of Exposure Compensation, or wish to start, a technique called exposure bracketing can expand upon that or perhaps help you to learn and understand over- and under-exposures.  Exposure bracketing is when you take at least three photos of the same scene, one at the “proper” or desired exposure, one under-exposed, and one over-exposed (see Figure 1).  For example you may take the second and third shot with the exposure compensation set at +1 and then -1.  This is done to ensure that you capture exactly the right exposure you desire or to experiment and see the results of varying your exposure settings.  A common feature of dSLR cameras called Auto Exposure Bracketing (AEB) can even automate this process for you.

In the days of film, exposure bracketing was a helpful technique – especially for critical situations – since one didn’t have the immediate feedback of the image on an LCD screen and a histogram.  It can still be used today for critical situations or for test shots when determining the right exposure settings.  The Auto Exposure Bracketing feature of digital SLRs automates this process by automatically changing the exposure settings between shots.  You set the amount of under- and over-exposure desired (such as +1, -1 or +2/3, -2/3) and then take three images in a row.  The camera automatically adjusts the exposure for each shot so that one is taken at the “proper” or baseline exposure, another shot is under-exposed, and the other is over-exposed.  If your camera is set on continuous drive mode, you can just hold down the shutter button and the camera will take the three shots in a row.  Or if you have it set on single shooting, you click the shutter three times in a row, ideally of the same scene.  Many cameras even allow you to dictate the order that the images are taken, and whether or not AEB cancels itself after one use or when the camera is turned off.

Or you can perform this process yourself, by either using exposure compensation between shots or by working in Manual Mode and adjusting the aperture or shutter speed setting between shots. Figure 2 – Weaver Constructing the Keshwa Chaca, Huinchiri, Peru – Three bracketed exposures of the same scene:  the “proper” exposure as determined by the camera (Evaluative metering mode) in the center, under-exposed -2/3 stop on the left, over-exposed +2/3 stop on the right.  The desired exposure in this case, for my eye, lies somewhere between the “proper” exposure and the over-exposure.  With auto exposure bracketing you can often customize the order that the bracketed images are taken, for example proper/under/over or under/proper/over.  In this example they were taken proper/under/over, so they are displayed here in a different order than actually captured.  Center exposure:  Shutter speed 1/1000, aperture f/5.0, ISO 100

Exposure compensation and bracketing are also used in HDR (high dynamic range) photography to take three or five or more photos of the same scene at various exposures.  All the images are then combined by the photographer, using HDR software, into a single image which will contain a much broader dynamic range of light and dark than is possible with a single image.

The basic principles of exposure as well as all of the other important functions and controls of a dSLR, such as Metering Modes and the Autofocus System, are explained in my e-book Ten Steps to Better dSLR Photography, as well as in all my other dSLR camera guides to specific cameras such as Nikon D5100 Experience and Canon T3i Experience.  Click on the titles or the cover below to learn more! 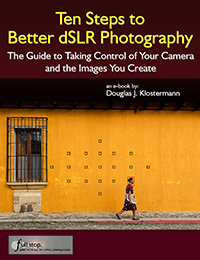